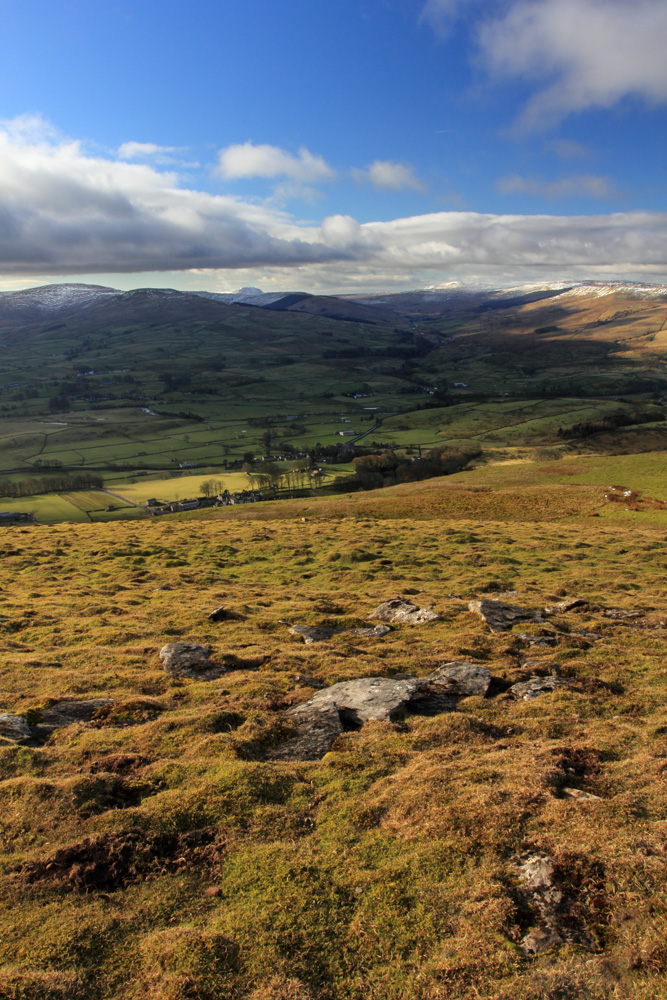 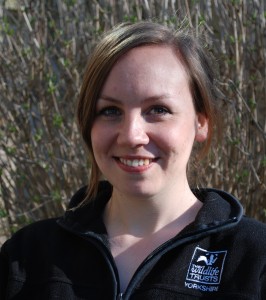 This view’s from Stags Fell, which is above Simonstone near Hawes, in Wensleydale. It’s one of our peat restoration sites. I did the peat survey behind where this is taken.

It’s very rare that we get to see a view like that: we’re normally in hill fog or drizzle or something, because most of the survey work we do is in the winter. Most of our sites are grouse moors. Even the ones that aren’t we still can’t go on in bird nesting season, so that takes out April to June. We’ve got a window in July when we try and get surveys done, and then we can’t get on the moors as often over the shooting season which is August sometimes up to December.

You come down out of the hill fog up there, and the Dales open out – you can see so far. It’s good to have that space; not seeing people sometimes is quite nice! I live in Leeds in one of the back to back terraces and my view’s of other people’s houses, so I like being out on the moors.

I suppose I do look at landscapes differently now – I can’t help it: I see the peat! I probably bore my friends with it, but I‘m always saying ‘I’ve worked there’ or ‘I’ve surveyed that hill’. There’s nothing there as far as some people are concerned, but we get to see it in detail; we get to see all the plants that are there, and all the birdlife that comes back in February/March time. We do get views that a lot of people don’t see because they tend to stick to footpaths further down, though this moorland is open access. We also get to see all the damaged blanket bog as well, which again lots of people won’t have seen, because it’s often right up on the tops, away from the footpaths.

Peatlands are an important habitat that store huge amounts of carbon when they aren’t degrading. Globally, they contain twice as much carbon as the world’s forests. Restoring damaged bogs can also improve water quality, protect archaeology and preserve a landscape that lots of people enjoy visiting.

Peat is formed from partially decomposed plant material and it can hold a lot of water. It’s mainly made up of sphagnum mosses, which grow on the bogs. As the moss dies it doesn’t rot away properly because of the acidic and anaerobic conditions. There are different kinds of peat bog – such as lowland raised bogs and the blanket peat, which tends to be on the tops and is fed only by the rain. Blanket bogs are a globally rare habitat and only about 4% of what we have in the UK is undamaged, for reasons such as drainage, overgrazing, fires, or peat cutting. Much of that damage is historic, but it takes so long for peat to recover: about ten years for a centimetre of peat to form, and it can be cut or burnt or drained really quickly.

Manmade drains called grips were cut into peat in the past; it was government funded and was mainly to try and drain the land for agricultural improvement, but they’re just eroding and washing peat away.

My job is to go out and do the work on the ground: so doing the surveys of sites, writing restoration plans and then overseeing the restoration and revegetation work itself. On site we block up the manmade drains with peat dams and use timber sediment traps in the more natural-looking gullies. The dams and sediment traps are designed to slow the water down enough to let the peat sediment settle out. The idea is that it’ll stabilise enough to let plants like sphagnum mosses and cotton grasses establish behind the dams and it will eventually, hopefully, re-vegetate completely. They’re working very quickly in some places and the pools that have built up behind them are already filling with either cotton grasses or sphagnum, which is exactly what we want to happen.