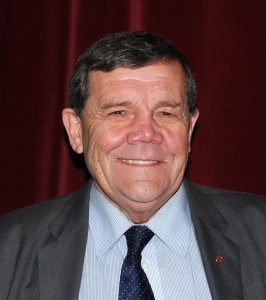 It’s a dramatic landscape here. When you’re driving you can see Ingleborough from a long way away. In the summer, some of the views you get of it, with a bit of cloud or whatever, are just beautiful. I saw it every single day when I was working in the quarry. I used to go and have a walk on the lower slopes, to get away from the desk. Ingleborough to me is the most beautiful of the Three Peaks. It’s iconic. You get different views from different areas, and it’s a beautiful backdrop.

It’s not just about Ingleborough, though, it’s the setting of Ingleborough. I chose this view because of where I live, and the countryside that I live within, and because it reminds me of the community that I live within. The community is the lifeblood of the area. People are always open and welcoming. If you have a Yorkshire friend, you really have a terrific friend.

The quarry’s not far away from this image. It’s a gritstone quarry. The stone’s quite rare. It’s an intrusion into what’s basically a limestone area. Its qualities are best described as a stone that wears quite slowly and presents a rough surface in the top matrix of a road’s surface, that provides grip to a car’s tyres. There are so few deposits in this country that exhibit these qualities.

I finished my working career as a quarry manager. I started out as an apprentice electrician, and then moved up through the ranks in quarrying. The job of quarry manager in Ingleton came up. I applied for it and got it, and moved up here. I retired five or six years ago now, but I still feel some affinity with the people who work within it. There’s a good deal of skill in what they do, and they’ve worked a large slice of their life creating and nurturing that skill. It isn’t just a question of going in with explosive and blasting it out and selling it; it’s creating a product that can achieve the benefits in terms of road safety that I mentioned earlier.

When I worked at the quarry, I gradually started dealing with the National Park, and realised that it was an organisation that I really felt at home with. The world of quarrying was traditionally one of confrontation – constant confrontation between environmentalists and the quarrying companies. I think it’s fair to say that the attitude’s changed now. Certainly I felt that consultation was always better than confrontation.

I became a Member of the National Park Authority when I was a quarry manager, which was unusual to say the least. I’ve been the Chairman of the Yorkshire Dales National Park Authority, with a year’s break, since 2004. I have to say that I have never worked for an organisation where as many people are so dedicated to what they do. Being Chairman has been simply the most enjoyable thing I’ve ever done in my life, by a considerable margin, because of the quality of the people that I have come into contact with. There are so many high points, far too many to single out one. Although when you see that school children from Horton-in-Ribblesdale have worked with schoolchildren from Keighley to build a wall on the top of Pen-y-Ghent, or we’ve created some more accessible footpath, it can make you feel so proud. That sense of achievement when you see people walking, enjoying the countryside and appreciating this unique landscape that we call the Yorkshire Dales – yes, that’s simply great. That’s what we are all about.