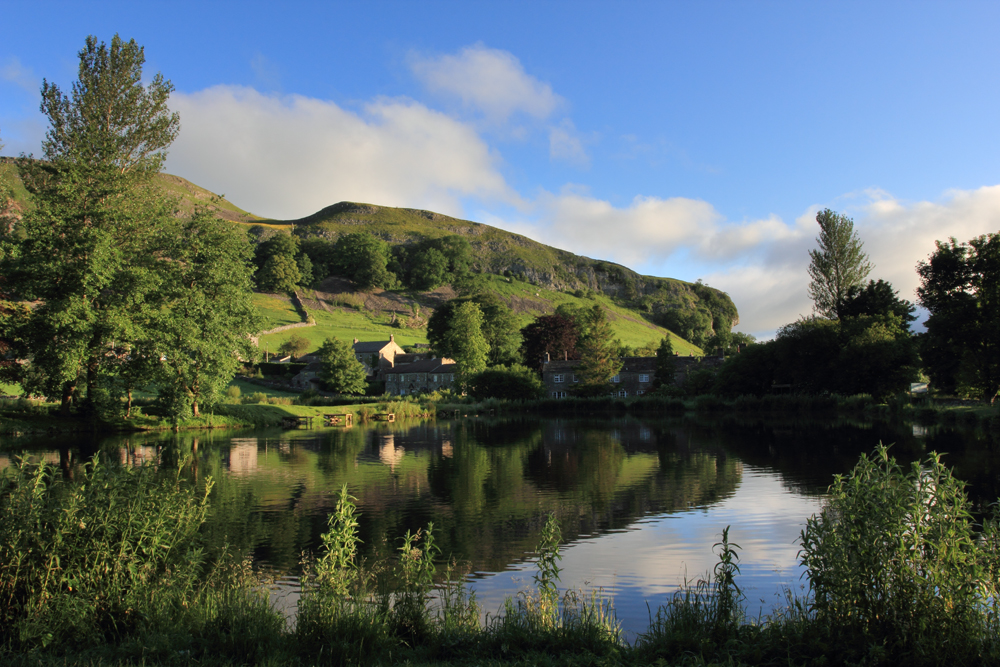 My great-grandfather bought the Kilnsey Estate. He sadly never lived long enough to move here. My grandfather also died young, and so my father inherited it aged about eight. So it’s been in the family since the beginning of the 20th Century. It was about 5-6,000 acres. Now I farm about 1,000 acres.

We started the trout farm here in 1978. It was just a tiny little raceway right at the top of the site. A raceway is where you farm your trout, it’s essentially a pen where the water comes in one end and goes out the other. There was nothing else here on the site, except the old generating house. We discovered the quality of the water was ideal for producing trout, so we started selling to the public. The old generating house became our farm shop. We used to sell half a dozen trout in a plastic bag – they weren’t even gutted in those days. And then we grew slowly, and we eventually built this farm shop and restaurant, selling locally-sourced foods. Now we produce about 35 tonnes of rainbow trout a year.

This particular area was just a field when we started. I tell the story about when I was still farming and I got an agricultural drainage grant because it was always a very boggy field. We tried to get the field better drained, but it didn’t work. Our next idea was to excavate these two lakes out and open it up as a fishery. So we did all that – it was a huge job – and it worked very well really. Of all the water which comes through the trout farm, the majority of it feeds into the lake.

It’s become a very popular spot for people to stop and take photos of the crag. It is part of the Turner Trail – Turner used to do a lot of painting in this area. He was commissioned to do a picture of the crag. No-one’s ever discovered whether he actually completed it, but he did sketches of it – that’s the only evidence they’ve got.

The crag was formed during the Ice Age. It’s very unusual because it has this overhang at the top. Of course it’s a Mecca for climbers. Some of these are ‘free climbers’ who use no ropes or pitons at all. Apparently they have to complete it in less than 20 minutes, because after 20 minutes your grip goes. My father once had a sheepdog that fell from the top to the bottom, and we thought, ‘well that’s it’, but it got to the bottom, shook itself and ran off!

Just out of sight on the right is the show field that goes right down to Conistone Bridge. We have our annual show there in late August or early September. It gets an attendance of about 14,000 people a year. I suppose the three main features are a drystone walling competition, trotting races on the show field in the evening, and the crag race. They race up the side of the crag, back along the top, and they come down the chimney, through the trees and then out at the bottom there – that’s one of the most hazardous and arduous fell races there is.

I’ve lived here all my life, and I just love the landscape. I think the older you get the more you appreciate it. I mean you go up on the hills where some of the views you get are fantastic, and you wouldn’t get them anywhere else in the world. We have a lot of very nice people living up here; the communities are great, and the old farmers are tremendous characters.

I suppose everyone likes to think you leave a little bit of a legacy – like the lakes we’ve made – but when you’re standing up there on the hills it makes you realise how transitory we are as human beings, when you compare how long all this has been here in the past, and how long it’s hopefully going to be here in the future. I think part of your brief is to look after it and hand it onto the next person who will responsibly do the same thing.