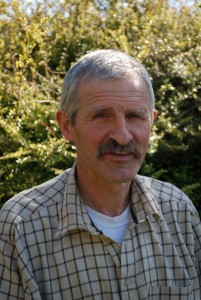 To be honest I haven’t really got a favourite view as such. I’ve never really thought that much about it. It’s just part of landscape – you take it for granted. I mean, if I go up there tomorrow and there isn’t that view, I would know then, but because it’s there I just accept it. I go up there every day to feed the sheep in spring. I always find it very relaxing because you’re away from everybody; I just find it easy there.

I moved here in 1959 when I was four. My father died when we were in our teens, and me and my brother just kept farming, with my mother at that time. When he died my mother got tenancy. I remember she used to go down to help milk and keep coming back in to get us ready for school. It’s just what happens in farming. It’s a way of life; it’s what we do. We were just 100 acres then. That was quite adequate to make a living off, but you can’t make a living off 100 acres any more. Everyone’s going at a faster pace these days. It’s a bigger scale; you’re pushed more. Supermarkets are controlling prices and you’re playing with quantity. We need supermarkets, but they’ve got a lot of power.

We’re quite fortunate. There were three farms in this village and this is the only one left. They were sold off in bits, and that’s enabled us to expand. A couple of years ago we managed to actually buy the farm. Up until then we were producing milk as well as sheep, but the next generation don’t want to be tied to producing milk; you have to be here twice a day. The next generation have seen there’s more things out there, and we aren’t getting any younger.

I farm with my brother, and I’ve got a daughter who farms – she goes to New Zealand every winter shearing sheep for about four months. We’ve got about 300 acres of that kind of land you can see here, and 300 acres of moorland, and just under 1000 sheep. We run a couple of hundred geld hog lambs, which are last year’s lambs that are coming into flock next year. They go onto moor because all they’ve got to do is grow. We put Swaledale sheep with one lamb onto other moor, then we put Swaledale Pures further up. Breeding stock with twins we keep on the better land. It’s all fairly good land to be honest. It’s quite steep up at the top here, steeper than it looks in this picture.

I don’t find farming side stressful, I find paperwork stressful; there’s so much paperwork with it these days. But I don’t think I’d ever want to do anything else. You’re just free, aren’t you? When you go up there, you’re away from people. You’re up there and it’s yours, and you’re quite privileged really that other people in theory can’t be there.

You can’t ask for a better way of life to be honest. But after saying that there are downsides. There are some days when you’re stuck in a puddle and it’s raining or it’s windy or it’s snowing or whatever, and you think ‘why am I doing this?!’ We do have problems with people too: they do leave gates open and they do bring dogs. It’s quite frustrating when you go up onto moor and see somebody with a dog running about. The sheep naturally run, and when they’re carrying two or three lambs they aren’t meant to run; you do get abortions. Most people don’t understand – they don’t know they’re in lamb. If they see some lambs there they’re more responsible, but it’s more important earlier on.

Each sheep’s an individual. You sort of recognise them. You keep seeing them and you think, ‘oh yeah, that’s the one that did whatever last year’. You do – as farmers put it – ken sheep. They are different in lots of ways – they look different, and they act different. All right, if you’ve got a thousand and there’s one missing, you can’t pinpoint it to ‘it’s that one missing’, but you’ve a fair idea. It is an interesting way of life.