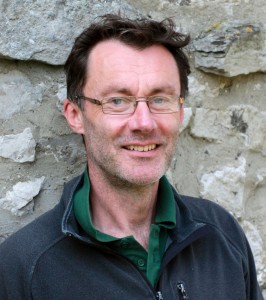 As you’re coming from the north, from Bishopdale over Kidstone’s pass, this is the first view of Wharfedale you get; it’s really dramatic. You see Buckden Pike on your left, with these enclosure walls tumbling down the hillside towards Cray. On the other side of the valley you’ve got a similar sort of landscape, but the fields are all hay meadows, not pasture.

The reason I work for the National Trust up here, in this type of property, is that I like the uplands. I like the open space, the open vistas, the ability to walk a long way with no obstructions, the fact you can see where you’re going, the wild aspect of it. In as much as you have wild landscapes in this country, this is a wild landscape, even though it’s totally manmade, and very accessible; everything you see is farmland.

The drystone walls emphasise the wild aspect of the landscape; they draw out the rock that’s there, only just underneath the surface. They bring out that stepped aspect of the landscape too, the geology of what’s called the Yoredale Series, which is a repeating sequence of limestone, sandstone, shale. You can see quite distinct terraces, with steeper slopes in between and occasional rock outcrops. People think that’s manmade, but it’s not, it’s a glacial relic if you like, from the different hardnesses of the rock.

Being a Ranger means doing a lot of practical work: footpath maintenance, fencing, tree-planting, making individual tree guards, woodland creation, wall repair. Walling hasn’t changed much; it’s a link to the past, an ancient craft. It’s been around for thousands of years, just using materials that are around.

This little plantation you can see down in Cray was probably planted in the 1800s. It’s all non-native species – beech trees, sycamore, maple and scotts pine. Maybe it was planted for shelter, maybe because it softens the landscape a bit. We rebuilt this wall on the right, where you can see the saplings, with the help of a group of regular volunteers. It was completely gappy, and falling down. We rebuilt it so we could put in a strip of trees between the road wall and that wall. The Dales is an open landscape, with very few trees – and perhaps we don’t want to change that aspect too much – but if we can get a long strip of trees here it sort of breaks up the wind and gives the farmer’s livestock a bit of shelter.

Another feature of the Yorkshire Dales is the limestone pavement. You can see a small example of it in the foreground here. When the ice retreated after the Ice Age, it left these bare platforms of limestone. Limestone dissolves in rainwater, so over thousands of years the minute cracks you get in limestone enlarge, and what was at one time just a smooth bed of rock breaks into blocks which are called clints. The cracks are called grykes; they can be ten feet or more deep. Within the grykes you get a more woodland type of environment, with damp, shade-loving plants like hearts-tongue fern and meadow sweet. It’s like a little mini-woodland growing in the gryke. On the clints you get a more limestone habitat – with grasses, rock rose, and wild thyme.

My father was Serbian. He lived in a limestone area in Croatia. That landscape’s much bigger and more rugged than this one, but there are similarities. If you walk between Yockenthwaite and Scar House, it has a feel of the landscape that he comes from. His family would have lived in that area for generations – you wonder if a love of one kind of landscape can be in the blood.